“Secret Lives of Mothers & Daughters” is officially in the wild!

I do hope you enjoy it. And if so, perhaps consider taking a moment to write a one or two sentence review on Amazon and/or Goodreads. It helps more than you know! 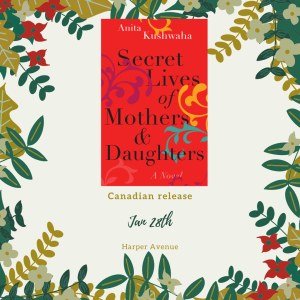 Thanks so much for your support in the lead-up to launch day. It means the world to me!

For readers of Shilpi Somaya Gowda’s “Secret Daughter” and Nancy Richler’s “The Imposter Bride”, a breathtaking novel from Anita Kushwaha about the ties that bind mothers and daughters together and the secrets that tear them apart.

Veena, Mala and Nandini are three very different women with something in common. Out of love, each bears a secret that will haunt her life—and that of her daughter—when the risk of telling the truth is too great. But secrets have consequences. Particularly to Asha, the young woman on the cusp of adulthood who links them together.

On the day after her eighteenth birthday, Asha is devastated to learn that she was adopted as a baby. What’s more, her birth mother died of a mysterious illness shortly before then, leaving Asha with only a letter.

Nandini, Asha’s adoptive mother, has always feared the truth would come between them.

Veena, a recent widow, worries about her daughter Mala’s future. The shock of her husband’s sudden death leaves her shaken and convinces her that the only way to keep her daughter safe is to secure her future.

Mala struggles to balance her dreams and ambition with her mother’s expectations. She must bear a secret, the burden of which threatens her very life.

Three mothers, bound by love, deceit and a young woman who connects them all. Secret Lives of Mothers & Daughters is an intergenerational novel about family, duty and the choices we make in the name of love.

Reading on the Run